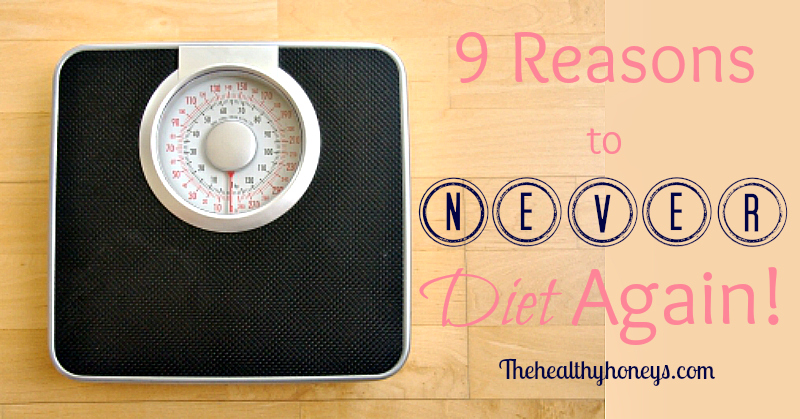 Dieting, and yo-yo dieting aren’t healthy… not for the body, or for the mind. I can’t tell you how many times I thought I had it figured out only to realize that I didn’t… Can you relate? Instead of dieting you should get your hands on this awesome book! It is not only changing how I think, but how I act, and how I look… all for the positive. And thank goodness none of it requires a diet!

How many times have you told yourself, “I have to go on a diet.” or “I am too fat to eat dessert.” Now let’s think about those statements for a moment… How does that make you feel? It feels like a punishment, like you aren’t a worthwhile human being. And don’t tell me it doesn’t. I’ve told myself those very things many, many times, and I know exactly how it feels to inflict punishment on myself. And those aren’t the only negative self-inflicted statements that go on inside the head of a dieter. I’m sure some of these will also be familiar:

Not a single one of these statements is uplifting to the body or the mind. This negative self talk only increases your chance of never feeling or being happy in your own skin. The more practice you have with negative self talk and degrading statements the less likely you will be satisfied by the results you obtain from that self-inflicted punishment we all like to call a diet. Not only that but you are also putting yourself at a higher risk of developing an eating disorder.

I know that yoyo dieting is more like a joke these days. It is becoming more and more popular to pick a diet and stick to it for-ev-er. Are you gluten-free? Paleo? Primal? Vegetarian? Or a real foodie? Yes, I did just bash on my own lifestyle choice a little. Restrictions can be dangerous, especially to people who think in very black and white terms (and yes, that would be me).

But the facts remain. Diets don’t work. Take a look at your own history and tell me if the diet you did last summer, or the year before that worked? Sure, maybe for a few months, or even for a few years, but eventually and in almost every single case the weight comes back.

Ultimately, dieting is not a longterm solution, and more likely than not you will end up weighing more than you did before you started that last diet.

3. Being Consistently Overweight is Healthier than Yo-yo weight-loss/gain

So this isn’t the golden solution here, but let’s be real. We all want that perfect body, but sometimes stopping the vicious cycle, allowing yourself to just be you, and weigh what you weigh, is in fact far healthier than constant weight fluctuations.

However, in a world where things are analyzed to death, yo-yo dieting hasn’t gotten enough attention most studies on the effects are inconclusive. But, in my opinion, if there are those that are concerned then there are probably more problems than we realize.

When has anyone ever been excited about a diet?… I mean about the actual diet, not the results?

They aren’t fun. They don’t make anyone happy. And they generally end with failure, or only temporary success.

I’ve been paying very close attention to the way my children and husband eat lately. And it has been an interesting analysis. Let me first give you a little background…

I have a 9-year-old, a 5-year-old, and a 1-year-old. All three are solid kids. All three eat A LOT of food. So, much food actually, that my poor college student siblings get a little nervous about what to feed my kids when we visit. They aren’t picky light eaters. They frequently out eat me and the Hobbits on Lord of the Rings got it rights when they were freaking out about all the meals between the three standard meals. That pretty much sums my kids up. They are slim, and healthy.

Now, my husband has never been on a diet. To spite the fact that his parents own a fast food restaurant, and he has eaten more french fries and coke than the average person should ever admit to he has never been over weight. He stops eating when he is full most of the time, and if he doesn’t love what he is eating he doesn’t just eat it anyway.

As I watched them in comparison to my own eating habits I noticed a couple of very important differences. The first one being that my children and my husband frequently leave food on their plates. Sometimes it is only a bite or two, and sometimes it is half of what they were served. So why do those few bites matter? The dieting mentality teaches you to ignore the hunger cues you get from your body. So instead of automatically knowing when to stop you eat everything on your plate without thinking about how hungry you are. Also, when you aren’t dieting you still have that little dieting voice in your head, so it is common to not only eat the last few bites on your own plate that your body didn’t need, but also finish the last few bites on your kids plates as you clean up the dinner… We wouldn’t want that to go to waste now would we? And we aren’t going to put two bites in the fridge for later, so down the trap it goes.

Now I’m talking about real food. I’m not talking about the chemicals they add to our food, or the GMO’s, or the highly processed stuff that’s made in a lab that they call food. I’m talking about food… the kind that grows in the ground, and grazes in the pasture. I’m talking about fruits and veggies, meat and grain, good ol’ honey and butter! It is so common these days to find diets that eliminate, one or several of the food groups, or diets that restrict macronutrients. Going grain free to lose weight, cutting fat, or going vegan could change your life!

Why yes, yes it could. But it doesn’t mean it is sustainable or healthy. And it might change your life for the worst.

When we eat food, with the idea that it is all good, and we fill our plates with variety, health and weight-loss will naturally follow.

7. You Can’t Diet and Love Yourself

The idea of the diet, is promoted by the idea that there is something wrong with you, that you are flawed, that you are broken. The diet industry drives the weight-loss industry by promoting this self-demoralizing mentality, and it is quite frankly sickening, dangerous, and unhealthy.

We’ve been taught on repeat our entire lives that we will be perfect if we lose those last ten pounds, if we try this quick cleanse, if we get those abs, or that butt.

This is a lie.

We are perfect now. We are valuable now. We are enough right now! If you can’t be happy now, then you never will be. It’s time to let go of that Photoshop lie, and love the skin you’re in.

It’s time to shift the focus from, “I want to lose weight.” to “I want to be able to run 2 miles.” or “I want to feel good.” or “I want to be stronger.” Then take actions to make those things happen. And guess what? These kinds of goals come with a couple of bonus rewards. Not only will you achieve your goal, but you will naturally lose unwanted weight as you do so, and you will discover how to love yourself by achieving actionable goals and recognizing your worth.

We all know that bulimia, and anorexia are eating disorders. That the people who suffer from these conditions need help both mentally and physically to recover and become healthy again. But what about milder forms of eating disorders? If you look around and shift out of the dieting mentality, and take a really good look at what we expect from ourselves you might realize that we live in a society where a lot of people, including most dieters, have a mild form of disordered eating.

In other words if any of these apply to you:

…Then, you may be suffering from a mild form of disordered eating.

And none of these even include the problem of emotional eating, which is often the main root causes of weight gain.

Diets can cause binge eating in three ways…

First: It is very common to have a “last super” mentality before beginning a diet. Sometimes this is just for a meal, and other times it lasts a week or more before starting a diet. So prior to a diet many people feel like they will be more committed and prepared to diet if they eat all the foods they love that aren’t healthy before they begin. They throw satiation out the window, and disregard how the food makes them feel. It is all about stocking up on what they won’t be allowing themselves to eat (and yes, I have been guilty of this in the past).

The saddest part about the last supper mentality is that this can become a lifestyle. How many times have you told yourself, “I’ll start a diet tomorrow.” Only to say it again the next, and the next… and with each of those failures to start the diet you have your last supper every evening in the form of ice cream and Oreo cookies?

Second: Let’s be real. During a diet, it is common to slip up. Sometimes grandma’s apple pie is just too big of a temptation. Am I right? Then instead of eating one piece, savoring the flavor and enjoying it, a dieter will engage in negative self-talk. They will tell themselves that they failed, that they will never lose weight, that they have no self-control, and then they give up and eat a few more pieces of pie.

Third: When the diet is over, and the dieter allows themselves to have less restricted, or unrestricted access to food, it can be very easy to overindulge on unhealthy foods. When a dieter goes from a low-carb diet, for example, to not being on a diet it is common to get confused about what to eat. So let’s say the low-carb diet restricted a lot of fruit. The x-dieter will think to themselves, “Fruit sounds really good!” But then instead of eating fruit they say to themselves, “Why eat fruit? Fruit is just as bad as cookies so, I might as well go for some cookies instead.” Then they do just that. This is especially common with athletes and body builders, but can happen after any diet.

Now it is time for you to join me! Time for you to make a commitment to yourself. Commit to never diet again, to love yourself more, to set health goals that have nothing to do with weight, and to be happy with yourself.

If you are discouraged, don’t forget to grab this book called Intuitive Eating, and read this post on the secrets to a happy and healthy relationship with food.

Oh! And one last thing, if you’d like to tell the world that you will NEVER diet again, if you have more reasons not to diet, or if you want support on your journey to never diet again then comment below. We want to know what you think! 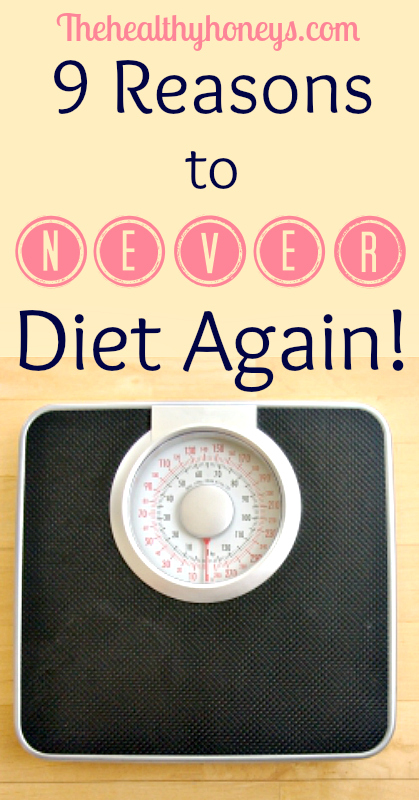